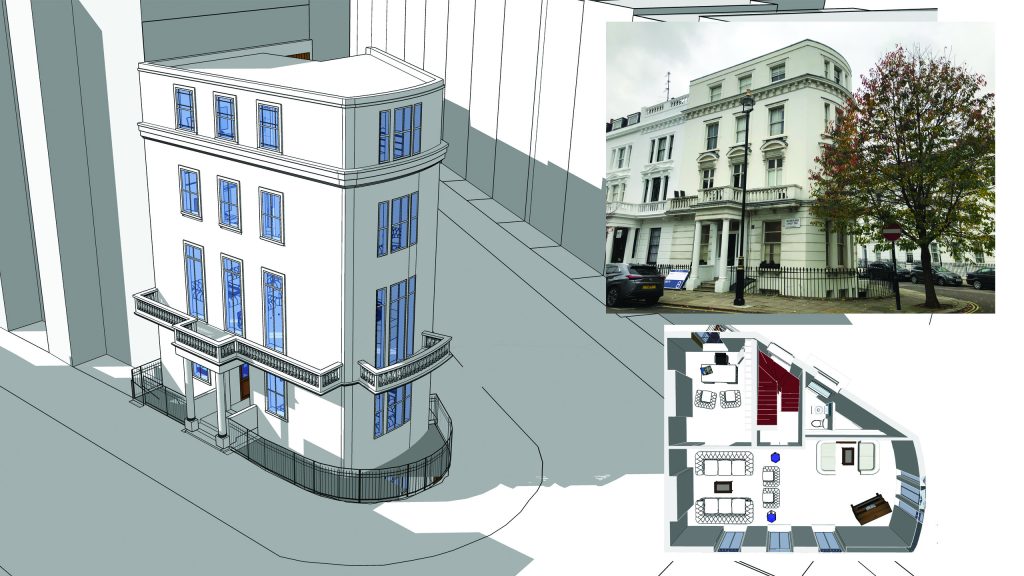 The client had purchased this property in Pimlico, which was two separated flats which they wished to combine into a family home. The project was come up with an initial concept interior which combine the space, made use of the 5 storey building creating space for the 4 family members.

The scheme included making use of the substantial basement areas, including creating a private terrace space in lieu of a formal garden to the property. Guest rooms and a personal gym would feature here.

The ground floor became the socialising floor, with generous lounge and dining space alongside a new kitchen with breakfast bar.

The first floor became a more formal sitting room, with piano, and private office/ library for the husband.

The second floor became a space entirely for the parents, with separate walk-in wardrobe rooms for both, as well as separate family & ensuite facilities. The master bedroom afforded the large corner room with the best views.

The third floor then became the floor for the children. Large spaces were created to allow private study areas for both, and their own separate ensuite bathrooms. The existing terrace on this level would be upgraded to mirror the terrace finishes in the basement, and include a BBQ with seating to enjoy the views across central London.

The interiors took the opportunity that the multiple floors offered, classical finishes in the ground & first floors – retaining the existing features around these spaces, and repairing/ upgrading them. In the private spaces where these features were not present, a more modern approach was taken, adding in luxury colours and tones. The staircase was to be updated to become the unifying element which threaded through the space.

The project started during the COVID outbreak, and the client’s desire to source from their native Turkey led to delays in the project moving forwards. As it stands, the project has not been moved forward.